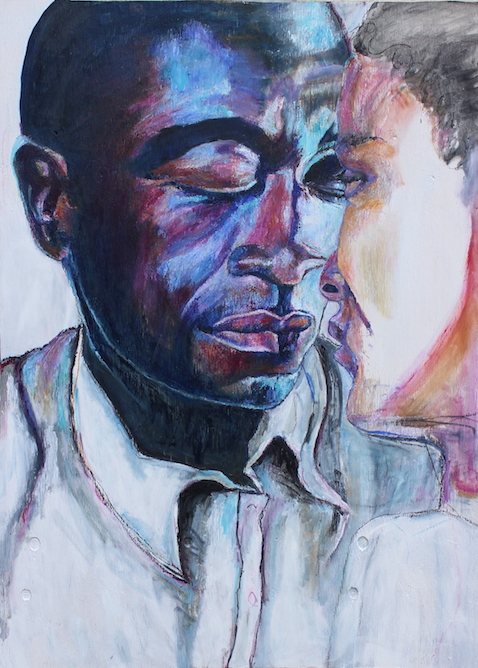 I started this painting when Donald Trump supposedly won the 2016 U.S.  presidential election.  I was in shock that enough people in the United States of America supposedly voted for a racist, sexist, homophobic hater that it soothed me to paint a love scene from the movie Hotel Rawanda. The idea that jumping off a roof with your children was better than your children seeing you killed by the militia seemed fitting to idea of Donald Trump as president.

Plus I love the colors in his skin. While I painted this painting, I had to face one of my biggest and most familiar personal demons. The demon of being not myself. Recently I realized that I have always depended on the people around me to set the parameter that I adapt to.  Art was the one place I could be who I am, until I became a professional artist.

I use to paint “the rebellion” of everything I held in to fit into the acceptable parameter.   For the past few years I have tried to do crafts of my work and make my work more appealing.  While painting this painting I faced my pleaser and rebeller, and kicked their asses. Or at least I won a battle. It is a strange thought that there is ground between pleasing and rebelling and its called being. Wow it is kinda mind blowing to be.